A Pay to Play Bookstore Scheme: The Reading Glass Books

Posted by Victoria Strauss for Writer Beware®
I've recently gotten several reports of phone solicitations from a New Jersey-based bookstore called The Reading Glass Books.
Why would a bookstore be calling authors out of the blue? Well in this case, to sell shelf space: $350 for six months. Authors can direct the store to sell the books at whatever price they like, and will get "100% of the royalties" (which of course makes no sense, since direct sales proceeds are not royalties). And if you're thinking that the store will order the books...no, no, no, don't be silly. Authors must provide their own copies.
Paid shelf space for self-published authors isn't a new idea. Here's one entrepreneur who set up a bookstore entirely on that model (the store closed in 2019). And a few years ago there was some media coverage of independent bookstores that were renting shelf space to self-pubbed and small press writers--in some cases for a good deal more than $350.
Whatever you may think of paying for shelf space, these were all real brick-and-mortar stores in the business of selling books to the public--not exploitative schemes aimed primarily at extracting money from writers. Based on its solicitation phone calls, sketchy website, and array of other paid services, my guess was that The Reading Glass Books fell into the latter category. I wanted to be sure, though, so I did some research.
Reading Glass claims a physical address--7 Wrightstown Cookstown Road (aka County Road 616) in Cookstown, New Jersey. To my surprise, there actually is a storefront. It's located in a small strip mall on a relatively empty stretch of road. Here's an image,, courtesy of Google (note the prime location, between Air Transport International and Domino's Pizza): 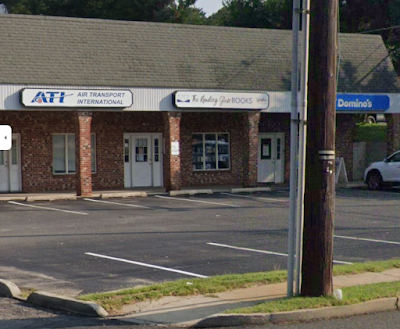 You can just see that books are displayed in the window.
The mall's roadside location is not exactly conducive to the foot traffic that real bookstores count on--though I guess it's possible that Reading Glass gets some walk-ins from next-door Domino's, or from the tattoo and barber shops that are also in this mall. However, those well-shaved and freshly inked book lovers won't find the store's inside much more prepossessing than its outside. Interior photos (a number of which are present on Reading Glass's Facebook page and Google listing) show a small space with sparsely populated shelves. Here we are in December 2020: 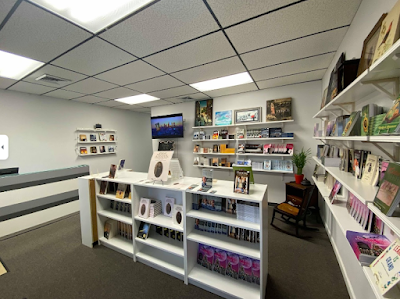 And here's a view from November 2021--inventory is still pretty puny, but it does look like the phone solicitations are having an impact: 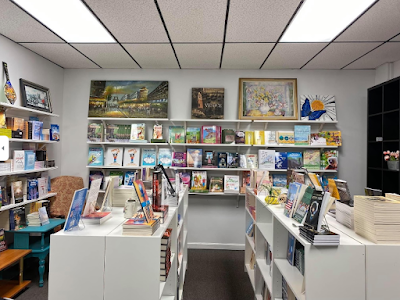 So okay, there really is a store. It's not in a great location, it doesn't look like it has a lot of stock, and there are no customers in any of the shots. I'm guessing that authors are lucky if they realize sales in the single digits. Even so, there's enough of a there there to suggest that Reading Glass isn't merely a $350 figment. Could it be that it isn't just a take-money-from-writers scheme? Could it be some entrepreneurial individual's misguided notion of how to "help" indie authors?
Nope.
See the Book of the Month banner? See the company name at the top? 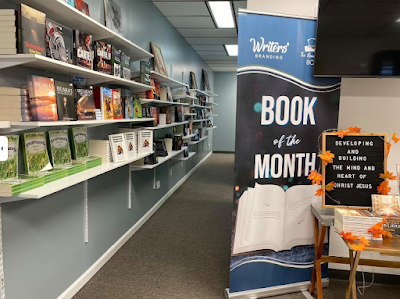 That's Writers' Branding, a self-described "full-service self-publishing company" that sells a large range of costly Author Solutions-style publishing packages and marketing services. Most of the marketing is junk (video trailers, press releases, social media and print advertising, paid book reviews, vanity radio and TV, etc.), and there are some huge markups: for instance, fee-charging review outfit Pacific Book Reviews offers a discounted rate of $225 for its standard review service to Writers' Branding authors, but Writers' Branding re-sells the same service on its own website, with some negligible add-ons, for $1,599.
There's also a companion of sorts to the bookstore: The Reading Glass magazine, one of those faux publications that is never circulated to the public and consists primarily of author advertising and paid interviews interspersed with badly-written articles. Authors can spend anywhere from $399 for a quarter page ad to $3,999 for the whole front cover.
In other words, The Reading Glass Books is just another junk marketing offering by a "self-publishing" company firmly in the Author Solutions mold. Interestingly, the shelf space deal that's being pitched to authors in phone calls for $350 costs $549 if bought from the Writers' Branding website. And if you want to be the Book of the Month advertised on the banner in the photo above? It'll set you back $1,649.
Also worth noting: according to reports I've received, as well as others online, the phone solicitors for The Reading Glass Books don't mention Writers' Branding at all. Which makes sense, if the calls are an attempt by Writers' Branding to expand its bookstore "service" beyond its own authors.
Writers' Branding is of relatively recent origin, with a web domain registered in December 2019. It's got a business registration in New Jersey, but like so many companies of this type, it's also registered in the Philippines.
Writer Beware has gotten a number of reports of phone and email solicitations by Writers' Branding, and there are more reports and complaints online: PissedConsumer.com has a few (including phone harassment), there are a couple at the BBB (both closed, and the details aren't shown). Bizapedia, not normally known for garnering consumer reviews, shows three complaints, all involving Reading Glass Books solicitations.
Share