Posted by Victoria Strauss for Writer Beware®
I first heard about editor and author coach Christina Kaye (aka Christina Broaddus) last year, via a writer who later posted this public complaint on Facebook. The allegations: misrepresentation of services (editing by a trainee rather than Christina herself), inadequate performance (the complainant paid for content editing, and got something more like copy editing), and refusal by Christina to either re-do the edit or provide a refund.
In addition to the allegations, the complainant provided supporting documentation...including Christina's furious emails and lawsuit threats when the complainant refused to back off. 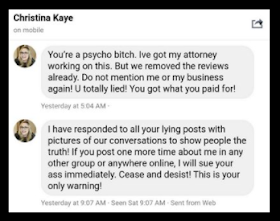 As far as I know, the lawsuit never materialized.
So who is Christina Kaye? Owner of two-year-old editing and coaching service Write Your Best Book, her resume includes a predecessor, Top Shelf Editing, which launched in September 2019 and whose URL is currently set to re-direct to WYBB, as well as stints with Limitless Publishing (publisher of several of her novels) and Dragon Street Press.
Other entrepreneurial ventures include Bon Chance Press, which started up in early 2017 and contracted several books before closing that same year without publishing anything; a registered business called Book Boss Boutique, LLC; and an Etsy storefront that sells writing-related planners and gifts. Christina also has a substantial presence on various social media platforms, hosts her own podcast, and has amassed a large following on TikTok.
The WYBB website displays testimonials from satisfied clients (of which there are apparently 300, or maybe it's 150?). And a single bad review, even one as convincingly documented as the Facebook complaint, doesn't necessarily indicate a problem business. Anyone can fly off the handle and say unwise things in response to pressure. Maybe this was an isolated incident? Maybe there was something else that explained Christina's over-the-top response?
Over the past year, however, several writers who've used Christina's services have contacted me to report similar experiences: editing that didn't fulfill what they were led to expect or the terms of the contracts they signed (such as copy editing presented as content editing, or editing by a trainee); hostile, threatening, insulting, and generally unprofessional responses by Christina to concerns and complaints (not just in email or texts but on social media); and refusal of refund requests, including in one case where services weren't just unsatisfactory, but mostly weren't delivered.
That writer went public with a video on Facebook, in which she describes paying $2,500 for editing and coaching that Christina subsequently decided she couldn't do; when the writer asked for the money back, Christina refused, claiming the payment was "in the bank" to cover future help the writer might need. The writer filed a dispute with her credit card company, which initiated a chargeback. Christina was not pleased. 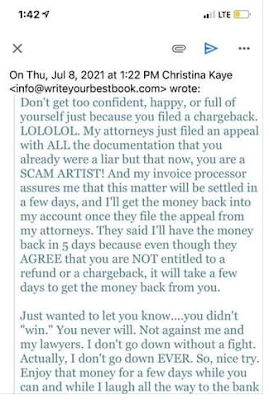 (Refunds seem to be a particular issue for Christina's business. Write Your Own Book's editorial contract specifically excludes them--in ALL CAPS:

Like "we don't guarantee that you'll make any sales" clauses in publishing contracts, this suggests not so much a hypothetical situation as an anticipated one. And why would an editorial service anticipate refund requests?)
In the past couple of weeks, I've also heard from WYBB staff members who say they have not been paid (and I've seen documentation to support this).
These are all serious complaints. What really stands out for me, though, is Christina's communication style, particularly her volcanic reactions to criticism and complaint, or to people she perceives as having disrespected or dismissed her. In addition to the publicly-posted emails and messages above, I've seen many examples shared with me privately by clients, staffers, and people with whom Christina has worked professionally. Several of them told me they're afraid of her.
Since I promise confidentiality, I can't share any of those examples. But my own exchange of emails with Christina should give you a flavor of what I'm talking about.
The same day I tweeted this...

I've received several complaints about Christina Kaye of Write Your Best Book that are very similar to this one https://t.co/OPoVzoOVxR https://t.co/q96XhvAnRK

Hmmm. I responded in my mild mannered reporter guise:

Within minutes, I got this:

Allll righty, then. (Between Facebook and Twitter, I actually have around 43,000 followers...still so sadly short of 100,000 friends, though.)
Christina did eventually agree to answer my questions. So I sent them off (you can see the exchange that prompted my first sentence at the bottom). 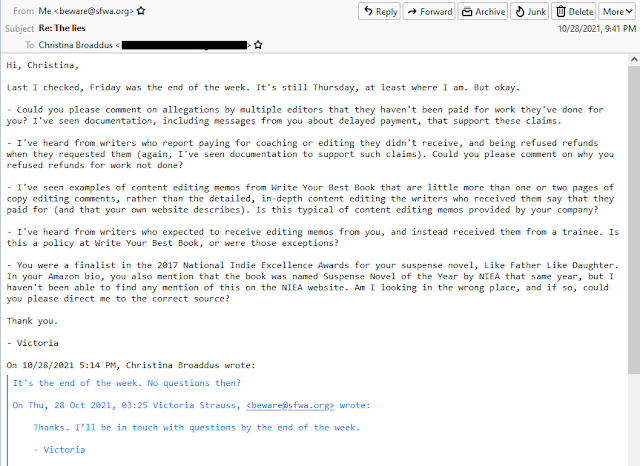 A bit to my surprise, she responded to at least some of what I asked.

(Right after receiving this, I emailed one of the WYBB staff members who contacted me about outstanding invoices. They provided documentation that confirmed that they were still waiting for payment.)
The TikTok Live didn't happen. But a few days later, Christina added three lengthy posts to one of her Facebook pages, in which she claimed to know who was complaining about her ("there are THREE former clients I’m aware of who are 'unhappy' with my services"), accused those people of misleading gullible fools like me with "false information and even doctored documentation", and threatened them, along with anyone who "jumps on that bandwagon", with "pending legal action." All with the greatest love, positivity, mercy, and compassion.
I always do due diligence, so I decided to reach out again.

This did not go over well.

Well, I tried.
Christina has since decided to take a break from social media.
If you're thinking of hiring a freelance editor, Writer Beware's Editors page has lots of information, tools, tips, and of course cautions, as well as links to helpful resources.
UPDATE 11/16/21: As I thought it might, this post has motivated new reports. I haven't obscured the names on these, as they're publicly viewable on Facebook
From the original Facebook complaint: 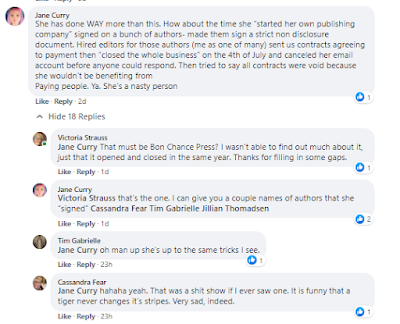 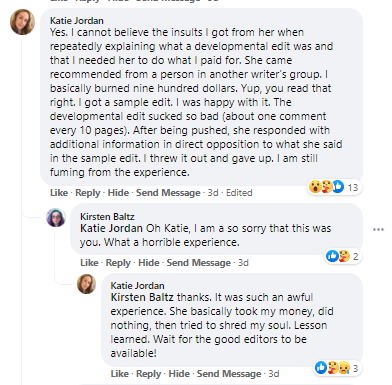 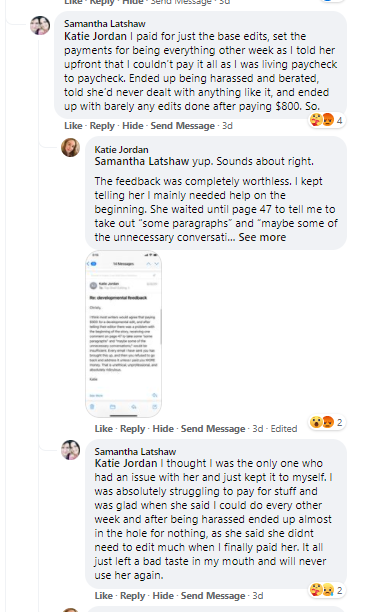 UPDATE 11/17/21: Christina has deleted the three long Facebook posts referred to above. I have screenshots, if anyone wants to see them.
Christina has also changed her name and handle on TikTok, reincarnating as ED Foster (quick editing tip: add periods to indicate abbreviations, unless you want people to think your name is Ed) and @bookbossacademy.

She has posted a video, all about how to deal with "enemies".
UPDATE 11/20/21: Christina has changed the name of her Facebook page to Book Boss Academy. The company website still has the old name.
UPDATE 1/5/22: Help me, Obi-Wan Kenobi! Subscribers to Christina's email list received this plea last week: 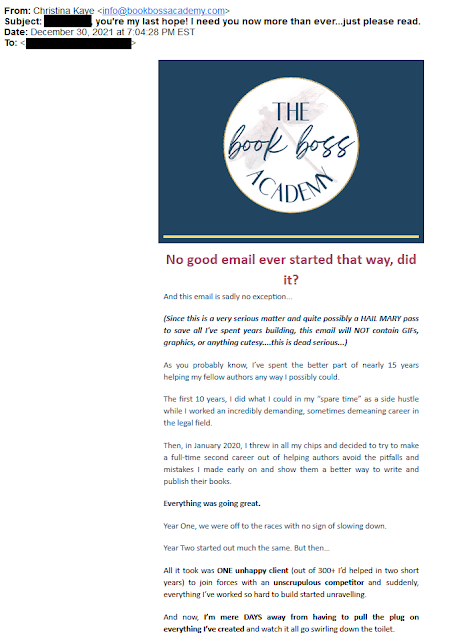 It goes on from there, but the gist is that she MUST get at least ONE new client signed up in the next 48 hours or it's goodbye Book Boss Academy. 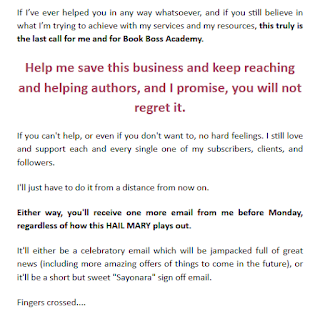 So far, the threat of Book Boss's demise appears to be greatly exaggerated. As far as I know, neither celebration nor sign-off email has been sent, the Book Boss Academy (nee Write Your Best Book) website is still live, and Christina is still busily posting videos on TikTok (now under her own name).
Share