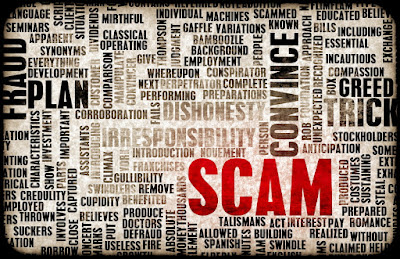 Posted by Victoria Strauss for Writer Beware®
A quick warning about a new impersonation scam.
I'm getting reports from writers who've received email solicitations from what appear to be real film companies. Here are a couple of examples: 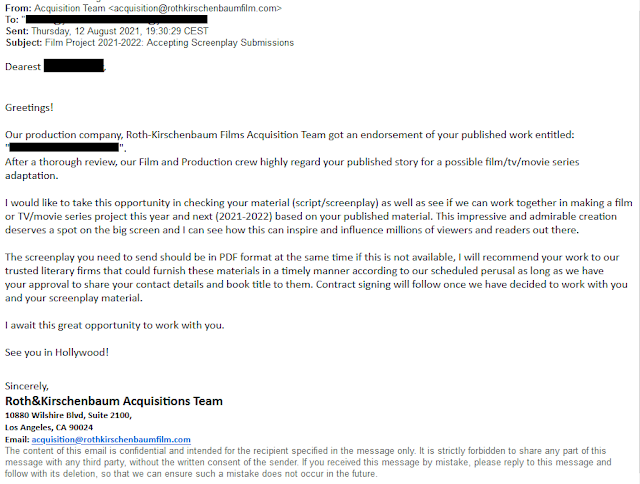 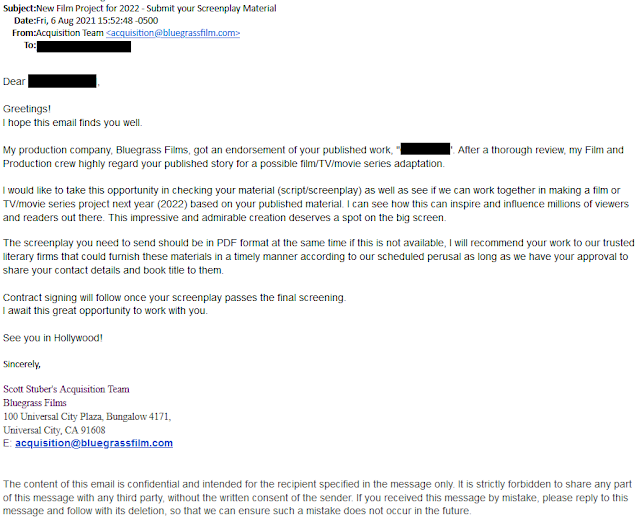 Note the identical language.
Roth/Kirshenbaum and Bluegrass Films are real enterprises, with real track records. So if the writer--who may be a bit dubious because of the out-of-the-blue contact and the poorly-written text--does a websearch, they'll learn that these companies actually do exist. There are some odd discrepancies: there's no "&" in Roth/Kirshenbaum, and Scott Stuber left Bluegrass for Netflix in 2017. Still, the realness of the companies themselves makes it easier for hopeful writers to dismiss any niggling doubts.
Of course, the whole thing is a bait and switch. The clue is the "trusted literary firm" that can "furnish" the screenplay that the writer undoubtedly doesn't have. After some back and forth, the writer receives this: 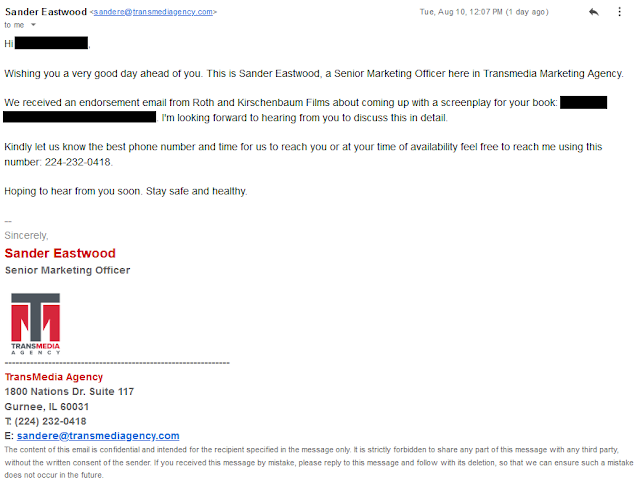 "Trusted literary firm" TransMedia Agency*--aka the scammer that's running the whole scheme--has what's essentially a placeholder website, providing just enough web presence to deflect the suspicion that might arise if it had no website, but containing virtually no meaningful content. The ungrammatical text and generic, unverifiable "about us" information are both major warning signs.
The writer also receives a "Screenplay Agreement Form" with a lot of legalistic mumbo jumbo about warranties, security, limitation of liability, blah blah blah. It's all window dressing for this:

So TransMedia is guaranteed to get at least $5,000 even if it never actually delivers the screenplay, and even if the writer smells a rat and doesn't hand over the installment payments. Not a bad payday for sending out a few emails and a fake contract.
As is the case for many scammers, TransMedia's Illinois address is a virtual office. Its LLC is registered in the name of Colin Carroll of 1063 Inverness Drive in Antioch, IL; most likely Mr. Carroll is just a beard, and TransMedia is really operating out of the Philippines. I would also guess that Roth/Kirshenbaum and Bluegrass Films aren't the only real companies that TransMedia is impersonating.
Remember, writers: REPUTABLE FILM COMPANIES DO NOT OPERATE THIS WAY. They don't contact you out of the blue. They don't refer you for paid services. You're safest if you treat ANY unasked-for solicitation as a potential scam.
* Not to be confused with this Transmedia Agency.
UPDATE 9/6/21: TransMedia is also soliciting in the name of Todd Phillips Productions. Much of the language is identical to the two solicitations above; note the addition of some fulsome flattery. 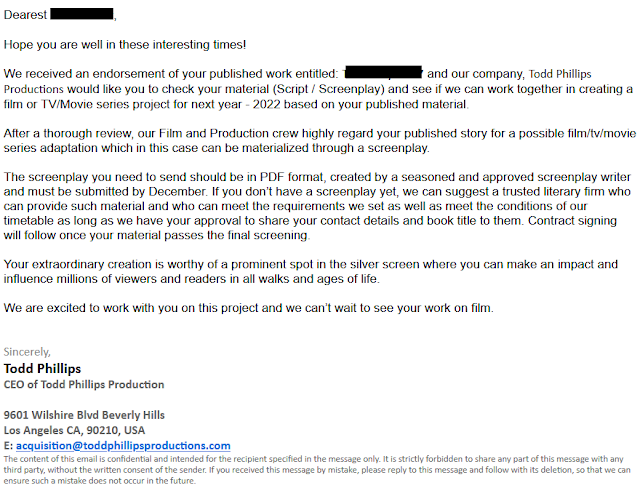 UPDATE 10/26/21: This fake production company solicitation was sent out by New Leaf Media LLC, posing as producer David Ellison. It's word for word identical to the Todd Phillips one above, sent out by TransMedia Agency. The writer was referred back to New Leaf Media to get their screenplay written, to the tune of several thousand dollars. 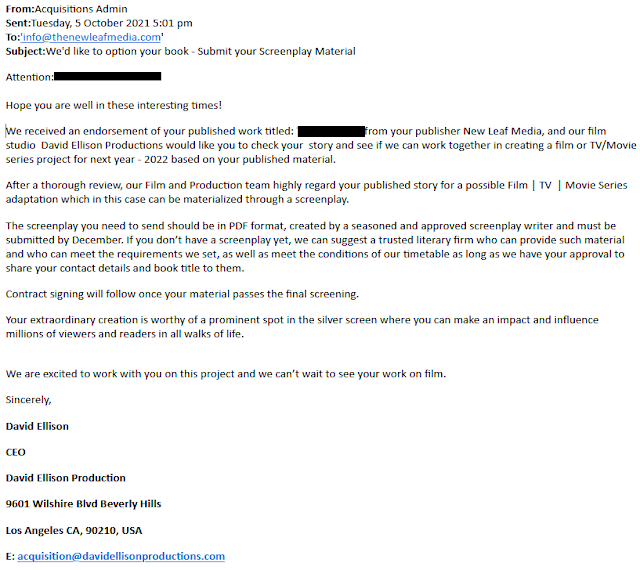 UPDATE 1/30/22: The scam is now soliciting as Roy Lee of Vertigo Entertainment, with emails largely identical to the various examples above. The "trusted company" to which authors are routed is Author's Outlet LLC (no website as of this writing, just a business registration in California made in August 2021).
UPDATE 2/21/22: Adding Brian Burk of Bad Robot to the list. 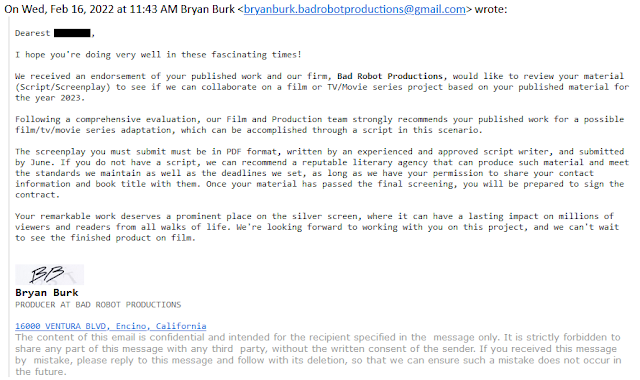