Posted by Victoria Strauss for Writer Beware®
Last week, the Authors Guild sent out this warning: 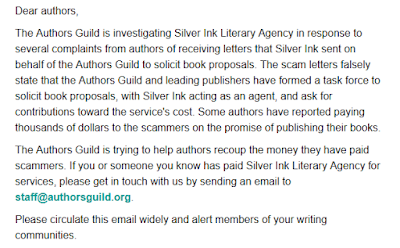 Writer Beware has been getting complaints about Silver Ink Literary Agency for some time. It's included on our list of more than 100 similar Philippines-based publishing/marketing/fake literary agency scams. (UPDATE 10/28/21: Silver Ink's domain registration has expired, so many of the links below won't work. It's currently soliciting from a "silverliteraryagency.com" email address, but as yet there's no website at that address.)
The Authors Guild isn't the only group whose name Silver Ink has taken in vain. It has also faked emails from Penguin Random House... 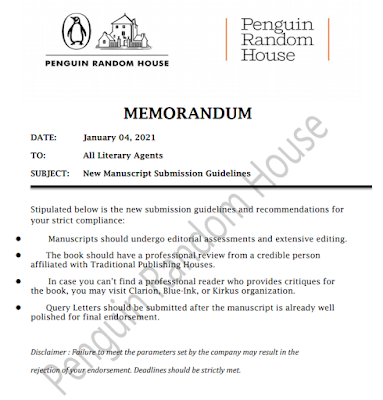 ...in aid of lending false credibility to the editing and other overpriced and substandard services Silver Ink pushes on its victims.
Here's what else Writer Beware has found out about Silver Ink Literary Agency.
Silver Ink also does business as Editors Press and Media. The evidence: identical website content (compare the content on their marketing pages), identical (and seriously ungrammatical) language in contracts and other documents, and the use of Heather Allen's name in faked-up emails from both scams. (Ms. Allen, who now works for Abrams, has posted an alert on her LinkedIn profile.) I've also had confirmation of the connection from a couple of the snitches who occasionally contact me to blow a whistle or rat out their competitors.
Editor's Press is actually the original scam; its domain was registered in October 2019, while Silver Ink's came to life a year later, in October 2020. Whoever ported Editor's Press content over to Silver Ink's website slipped up in the proofing department: 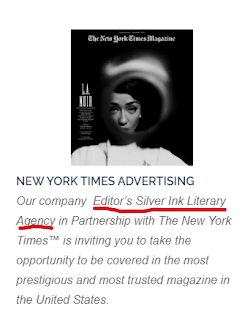 Like its mini-me, Editor's Press plays the impersonation game to bamboozle writers into paying for editing. Its chosen target for fakery is HarperCollins:

You can read more about Editor's Press's impersonation scheme here.
Silver Ink also does business as Global Review Press. Global Review is the baby of the bunch; its domain was only registered in April 2021.
Again, there's identical content on the marketing page--including, amazingly, the same uncorrected proofing error noted above. Silver Ink and Global Review both have business registrations in Nevada, and share the same principal and registered agent, Sandra L. Herrera of 3996 Kettle Rock Ct in Reno. (Editor's Press is registered in Virginia, also to what appears to be a private individual.)
The owner of these ventures is Gary Serdeña, aka Shawn Serdeña, aka Shawn Gatewood. According to his Facebook profile, Shawn (the name he apparently prefers) is from Tacloban City in the Eastern Visayas region of the Philippines, and enjoys posting photos of himself conspicuously consuming the income generated by his author-fleecing ventures.
Shawn's personal FB feed includes many references to Editor's Press, such as this one on the occasion of the company's one-year anniversary, and this one from a couple of months ago celebrating a brand-new business location. There's even a ribbon-cutting video. Ripping off authors is lucrative!
(UPDATE: Scammers like Shawn are among my most faithful followers. Shortly after I published this, Shawn deleted all the posts and video I've linked to in this article. He also appears to have deleted the original Facebook page for Editor's Press and Media [unfortunately not archived by the Wayback Machine], and created a new one [currently with almost no content]. Additionally, he has changed his name on Facebook and Instagram: he's now going by Denzel Agaton, and claiming to live in California [a claim somewhat contradicted by his many posts and check-ins referencing Cebu]. The URLs of his FB and Insta presence memorialize his real name, however, and you can still see him posing in front of the Editors Press and Media logo.) 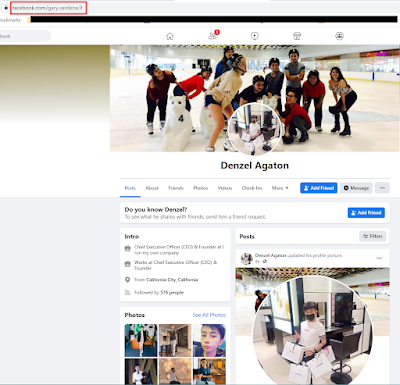 Shawn is an interesting example of how these publishing/marketing/fake agency scams evolve and spawn. He has posted photos of various awards he has won; in addition to documenting the several names he uses, they show that he worked for Author Solutions (the progenitor of the scam phenomenon of which Silver Ink and its siblings are a part) and then for Innocentrix--the name under which scammer Page Turner Press and Media does business in the Philippines--before starting Editor's Press in 2019.
Shawn can also be found on Instagram. He has two TikTok accounts.
Silver Ink currently has an F rating at the Better Business Bureau, due to unanswered complaints.
Editor's Press fares slightly better, with a C-, but only because there have been fewer complaints for it to fail to answer. Global Review has no BBB listing, likely because it's new enough that complaints haven't yet started stacking up.
Last but not least...I know I'm a bit of a broken record here. But the number one way to protect yourself against scammers like Silver Ink is to assume that ANY out-of-the-blue solicitation is a scam.
Sound extreme? It's not. Reputable publishers and literary agents rarely reach out to authors directly. For scammers, on the other hand, it's their primary recruitment method. With Silver Ink and the more than 100 outfits like it aggressively trolling for victims, you are safest if you treat all solicitations as non-legit, at least until you've investigated (you can search this blog, or email me).
Mistrust, and verify.
UPDATE 9/21/21: Somewhere a tiny violin is playing. 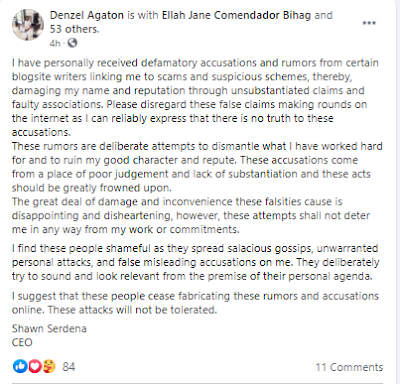 UPDATE 10/12/21: Gee, the name change didn't last long. On his Facebook page, Shawn is Shawn again, sharing inspirational thoughts and evidence of conspicuous consumption.
UPDATE 10/29/21: The impersonation game is alive and well at Silver Ink Literary Agency. Check out this bogus "letter of intent", supposedly from Penguin Random House (bonus bogosity: the "certified true copy" stamp at the bottom). The carrot: a supposed $30,000 "initial author royalty". The stick: the author who got this was asked to pay a $2,000 "rights and licenses" fee (there's no such thing). 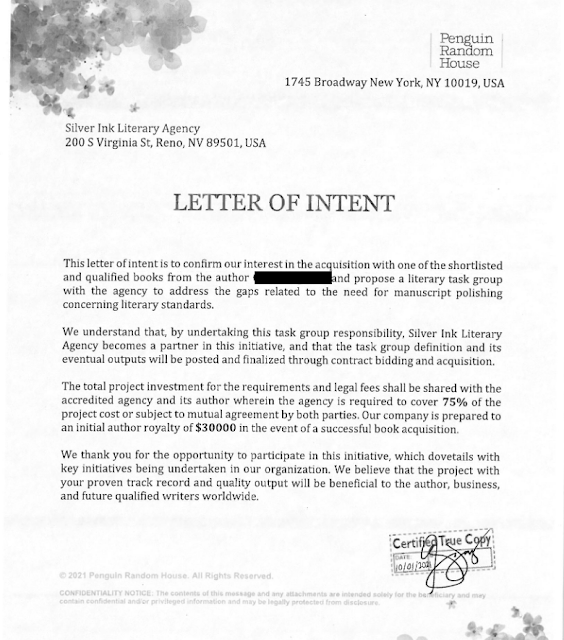