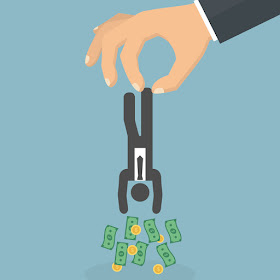 
Scroll down for updates

On this blog and elsewhere, I spend a lot of time warning about junk book marketing services: so-called marketing and promotional services that are cheap to provide, but can be sold at a big markup, and for the most part are of little worth for book promotion or can more effectively be done by the author him/herself. Some examples: press releases, email blasts, book trailers, book fair display, social media setup, and social media advertising.

All these and more are hawked to writers at exorbitant prices by assisted self-publishing companies like the various Author Solutions imprints--and also, increasingly, by their scam imitators. Either way, they're a ripoff...but the scammers demand even bigger fees, tell even bigger lies, and deliver even more shoddy results. And that's when they're not just taking your money and running.

A few weeks ago, I focused on pay-to-play radio interviews--another junk marketing service--and why they're not worth the huge fees charged by providers. This week, I'm going to talk about pay-to-play magazines. (You'll note that all the companies discussed below are on my Big List of Publishing and Marketing Scams.)

Have you ever received a solicitation like this one? 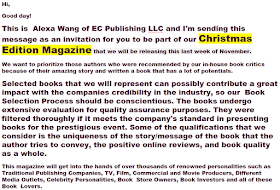 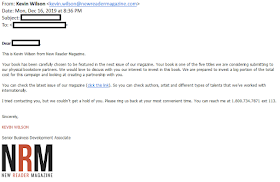 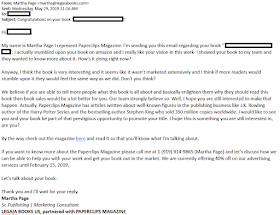 Of course the books haven't undergone "extensive evaluation", or been "carefully chosen", or showed to "a team" that "really like[s] your vision". Such solicitations are just spam, blasted out to addresses scraped from the internet or stolen from self-publishing company customer lists.

Nor are these real magazines, in the sense of publications that are widely available to the public. Instead, they're collections of ads, interviews, and "feature articles" sold to writers at huge prices, sometimes interspersed with general interest pieces (often really badly written) or, in the case of New Reader Magazine, with fiction, poetry, and art. These "publications" are never circulated in any meaningful sense; they may be posted online, but their primary mode of distribution is from tables in company booths at book fairs...where many of the authors buying ad or interview space have already paid a premium for display. 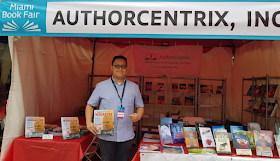 The prices the faux magazines charge for placement can be enormous. For instance, here's the  "Executive Full-Spread Ad" from Paperclips Magazine, which is owned by (not "partnered with" as claimed in its solicitation email) publishing and marketing scammer Legaia Books: 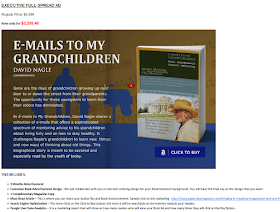 Here's one writer's not very satisfactory experience with Paperclips. I've gotten emails from many others.

New Reader Magazine--which looks quite legit if you don't know better--is owned by New Reader Media. Though the magazine actually appears to provide small payments for content acquired via general submission, it charges anywhere from $5,000 and up for the magazine feature and "partnership" mentioned in its solicitation email. Like Legaia, New Reader Media also sells publishing and marketing services at gigantic prices, as well as book-to-screen services (always a scam).

New Reader has accumulated some online complaints due to its aggressive solicitation and poor performance. It has also been caught making false claims, such as that it was responsible for Christopher Paolini's bestselling novel Eragon being made into a movie.

The Christmas magazine that's the subject of EC Publishing's solicitation can be seen here (if you're brave, you can also check out the Las Vegas Edition, produced for the Las Vegas Book Festival). Like most of the pay-to-play magazines, it's a compilation of author-purchased ads and features, laughably badly-written general interest articles, and a smattering of actual advertising. Prices for inclusion range from a few hundred to several thousand dollars, depending on how much space is purchased.

Thanks to its aggressive soliciting, EC Publishing is the subject of a warning from the Australian Society of Authors.

Authors Press's Authorial magazine has its own website (note the "notice of non-affiliation and disclaimer" that pops up if you linger on the home page: the scammers read Writer Beware). Writers can buy a spot in the magazine, starting at fees of a few hundred dollars; ad space or "features" are also included in some of the more expensive promotional packages Authors Press offers.

Authorial's BEA 2019 issue consists of more than 75 pages of author ads, interviews, and excerpts. Just imagine the thousands of dollars in revenue generated by all those pages, some of which include ten or more ads. Also have a peek at Authorial's gallery page, which features photos of  the dozens of books displayed in Authors Press's BEA booth. In 2019, writers were being charged anywhere from $1,000 to $3,500 for presence in the booth, depending on what level of activity they chose. Now multiply all of this by the seven book fairs Authors Press attended in 2019. It's not chump change.

From URLink Print and Media comes Harbinger Post. Like the others, it's nearly all paid content, interspersed here and there with staff-written features. Here's an example of the caliber of that writing: 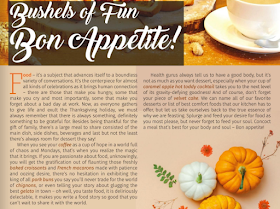 Other scammy publishing and marketing companies that sell space in proprietary magazines (I've received multiple complaints about all these companies):

Print advertising is expensive, and how useful it is for book marketing is an open question. But if it is to be effective at all, it must offer the possibility of being seen by a large audience of potentially interested readers and buyers.

That means circulation, subscriptions, and quality content beyond mere advertising--not ad-stuffed, error-ridden, proprietary publications whose only exposure to the public is a "free, take one" stack on a side table in a book fair booth. Even if the ad slots weren't insanely expensive--and even if writers didn't have to pay for what real magazines never charge for, such as interviews--buying space in these fake publications would be a waste of money.

UPDATE 1/29/20: It's not just scammers that run this kind of racket. Via its PW Select - BookLife feature (which I discuss here and  here), industry magazine Publishers Weekly has begun to sell a "very special" service:

These prices rival the scammers'. And the promise of print exposure is not quite what it seems. Per PW's Q&A explainer, the interviews appear not in the body of the magazine, but in "PW’s BookLife supplement, which is published the last week of each month bound into that week’s issue of Publishers Weekly". In other words, easy for readers to ignore or skip over.

PW actually has the wide circulation and industry audience the scammers only pretend to. But given the huge fees and the segregation of the interviews in a separate supplement--not to mention the open question of how useful any kind of print advertising is for book marketing--there's more than a whiff of the same kind of exploitation here.
Share