If you're not part of the horror or speculative fiction community, you may not be aware of the scandal that over the past two weeks has engulfed ChiZine Publications, a (previously) highly-regarded Canadian independent publisher.

In September of last year, several authors, including Ed Kurtz, made a complaint to the Horror Writers Association about long-overdue royalties at ChiZine. On November 5 of this year, after the complaint became public knowledge, CZP posted a statement on its Facebook page, claiming that Kurtz's royalties were "currently paid in full" and that "Any other monies he might be due will be paid on his next royalty statement". Kurtz's response, posted by his partner on Facebook a day later, was blistering:


The statement from Chizine neglects a number of salient facts, such as the moment in July 2018, at Necon, when I explained to Brett Savory that my partner was facing a layoff, our cat was ill, we were in severe financial distress, and I had *never* been paid a single cent of royalties in what was at that time almost two years for a moderately successful book. He actually grinned and said, "Things are hard for everyone right now" before walking away. The following morning it was reported to me that Sandra was loudly complaining in the dealer room about me having asked about my royalties, and of course the two of them went on a whirlwind trip around the world a few weeks after that, showing us all that things weren't so rough for them, after all.

In fact, I'd asked after my royalties several times and was rebuffed or given excuses every single time (usually something wrong with their accounting software or something similar, which I later learned they’d been saying to authors for years). I only went to the HWA after several other frustrated CZP authors (one of whom hadn't been paid in five years!) strongly encouraged me to do so. I expressed fear of bullying and/or retaliation, and some of these authors promised me they'd have my back (they didn't). And yes, a lot of us got paid through my efforts, though it is untrue I'm paid in full. I was never paid royalties for the months of my first year of publication, 2016, though CZP continues to claim I was. I just gave up on this.

Kurtz's experience was not isolated.

Between 2010 and 2015, Writer Beware received a handful of complaints (fewer than five) about ChiZine from authors who cited months-late royalty payments or long waits for contracts. Because the complaints were so few, and also because the authors all did eventually receive their payments or their contracts (though in most cases only after persistent prodding), it wasn't clear to me whether the tardiness indicated a pattern of problems, or was the kind of occasional glitch that can afflict otherwise reputable small presses with small staff and tight finances.

As it turns out, those few complaints were just the tiniest bubbles drifting up from what appears to be a roiling ocean of dysfunction.

Following Kurtz's public response, CZP authors and staff began to come forward with their own experiences--a tsunami of serious allegations including non-payment (some staff say they were never paid for years of work), extremely late or missing royalty payments (years in arrears in some cases; many authors report having to fight for what payment was received), erratically-produced royalty statements (CZP breached at least some of its own contracts by sending out royalties once a year instead of bi-annually--more on that below), missed pub dates, broken marketing promises, and financial mismanagement--especially concerning, since a big chunk of CZP's budget comes from grants and subsidies. (Former CZP staff member Michael Matheson has written a pair of illuminating posts on CZP's finances, including its treatment of grant money and habitual financial distress.)

Staff and authors also--in multiple, strikingly similar posts and complaints, including some received by Writer Beware--cite a toxic work culture that featured bullying, intimidation, sexual harassment, racism, gaslighting, and more. Several of those who contacted me told me that they felt CZP operated "like a cult," with charismatic leaders at the top who were admired and feared in equal measure, and whom many dared not defy.

This account only scratches the surface. For much more:
On November 11, CZP's founders, Sandra Kasturi and Brett Savory, posted a statement on the CZP blog and Facebook page indicating that they have decided to "step down." Although the statement mentions financial issues ("we have taken a short-term personal loan to bring payments up to date"), it doesn't address the many other complaints that have been leveled against the company--and, notably, does not include an apology.

The response has not been kind.

Despite all of the above, there are still those who continue to defend CZP, and to brush off the statements by writers and staff. For example, this, from editor Stephen Jones (Jones's post has been removed; this is a screenshot posted to Twitter): 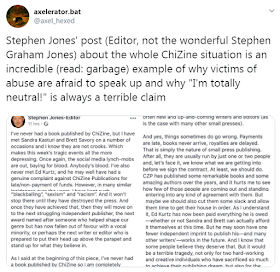 What stands out for me here is not just the skepticism that whistleblowers always have to face (and which, even when the publisher doesn't try to intimidate or engage in reprisals, makes it so much harder for whistleblowers to come forward), but the defense of unprofessional business practice--not just by CZP but, apparently, by small press publishers in general. Small presses are doing something great for writers and readers, so we should "cut them some slack" when they fail to pay, or don't fill book orders, or miss a pub date, or engage in some other kind of behavior that has a negative impact on staff and authors. That's "simply the nature of small press publishing." Deal with it!

It's a really common argument. I can't tell you how often I've seen some version of it--not just from toxic or troubled publishers, but from the writers they are screwing over. But it is bullshit. Complete and utter bullshit.

No matter how "worthy" a publisher may be, that does not give it the right to abuse its writers or its staff--whether by accident or design. Publishers function in the realm of art, but they also need to function like businesses--not like cults of personality, not like sinecures, not like kitchen-table hobby projects where it doesn't really matter that they know little about publishing and have never run a business as long as they've got good intentions. You don't get a pass because you've got a noble goal. You don't get a pass because independent publishers are struggling and we need more of them. You don't even get a pass because you're putting out good books from disenfranchised authors. You need to run your business right, and treat your writers and your staff right, or you have no business calling yourself a publisher.

Which brings me to my next point. The scope and range of what has apparently been happening at ChiZine is bigger than usual (and having seen as many small press implosions as I have over the years, it's amazing to me that it took so long for the scandal to break). But it's important to emphasize that it is not an isolated occurrence. Contract breaches, financial malfeasance, even the kind of harassment and gaslighting and dictatorial behavior that CZP authors and staff describe--all are rampant in the small press world. Just go back through a few years of the entries on this blog, and you'll see plenty of examples.

I don't mean to tar all small presses with the same brush. There are, it's important to acknowledge, many small and indie publishers that operate with complete professionalism and do all they can to treat their authors right. But there is a huge, huge problem in the small press segment of the publishing industry, and we don't do writers--or readers--any favors in dismissing or downplaying or making excuses for it.

I'm not the only one who is making this point. Silvia Moreno-Garcia, who had payment issues with CZP and also has experience running a micro-press, addresses the issue in a Twitter thread: 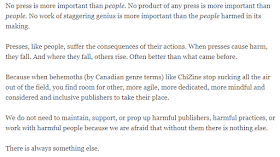 And, commenting on the Chizine situation, writer and reviewer Gabino Iglesias points out: 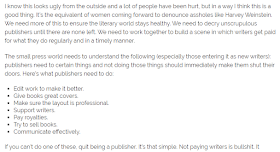 The scandal has unfolded very quickly but there've already been consequences. High Fever Books reports "a mass exodus" from CZP, with authors requesting rights reversions for their books, and withdrawing stories from CZP's forthcoming Christmas anthology. The Ontario Arts Council, one of CZP's funders, has recently removed CZP from its list of grant recommenders. And SFWA has issued a statement:

There's been some discussion of irregularities with CZP's royalty statements. I've seen a number of these, kindly shared with me by CZP authors, and while they're somewhat of a chore to figure out and are missing some information that ideally should be present, the numbers do add up. However, a few things are sub-optimal.

For CZP, "reasonable" seems to mean 50%. This seemed high to me, so I did a mini-canvass of literary agents on Twitter. Most agreed that smaller is better--maybe 25-30%, though some felt that 50% was justifiable depending on the circumstances. They also pointed out that the reserve percentage should fall in subsequent reporting periods (CZP's remains at 50%, unless boilerplate has been negotiated otherwise), and that publishers should not hold reserves beyond two or three years, or four or five accounting periods (CZP has held reserves for some authors for much longer).

(If you're unclear on what a reserve against returns is, here's an explanation.)

- Per CZP's contract, royalties are paid "by the first royalty period falling one year after publication." What this means in practice (based on the royalty statements I saw) is that if your pub date is (hypothetically) April of 2016, you are not eligible for payment until the first royalty period that follows your one-year anniversary--which, since CZP pays royalties just once a year on a January-December schedule, would be the royalty period ending December 2017. Since publishers often take months to issue royalty statements and payments following the end of a royalty period, you'd get no royalty check until sometime in 2018--close to, or possibly more than, two full years after publication.

In effect, CZP is setting a 100% reserve against returns for at least a year following publication, and often much more. This gives it the use of the author's money for far too long, not to mention a financial cushion that lets it write smaller checks, since it doesn't have to pay anything out until after returns have come in (most sales and most returns occur during the first year of release).

I shouldn't need to say that this is non-standard. It's also, in my opinion, seriously exploitative.

- And...about that annual payment. It too is non-standard--even the big houses pay twice a year, and most small publishers pay quarterly or even more often. It's also extra-contractual--at least for the contracts I saw. According to CZP's boilerplate, payments are supposed to be bi-annual after that initial year-or-more embargo. The switch to annual payment appears to have been a unilateral decision by CZP owners for logistical and cost reasons, actual contract language be damned (I've seen documentation of this).

A publishing contract absolutely needs to bind a publisher not just to pay, but to account royalties on a regular basis (whether or not payments are due). If there's no contractual obligation for the publisher to provide royalty accounting, it may decline to do so--and that's not theoretical, I've gotten more than a few complaints about exactly this. Just one more reason to get knowledgeable advice on any publishing contract you're thinking of signing.
Share