Recently, SFWA's Contracts Committee was made aware of a situation in which a well-liked publisher canceled the publication of a number of books it had contracted to publish. The publisher said the decision was made because of "unexpected changes" at the company. The Committee has reviewed the contract in use, which lacked a provision for such a cancellation. The Committee believes that canceling a contracted book that satisfies the author’s obligations is at odds with the spirit of the contract. Making this situation worse is the fact that these were no-advance contracts. Because no advance was paid, the publisher could make this decision without financial penalties. The authors' books, were, in effect, put in limbo for many months and the authors received nothing but an apology. Besides depriving the authors of the ability to sell the books elsewhere during this delay and putting off any income from the books into the indefinite future, the authors careers suffer as a result.

Publishers of all sizes may find themselves unable to live up to their contractual commitments for a wide variety of reasons, some of which could not have been reasonably anticipated. Hence, the Contracts Committee urges writers to think carefully about signing a contract that provides no advance, or only a nominal advance, while tying up their work for a lengthy period of time. Critically, payment of an advance gives an indication the publisher actually has the financial resources to meet its obligations. Publishers who do not pay advances or pay only nominal advances should include language in their contracts specifying how they can cancel a book and what happens if they should cancel a book, including a specified amount of compensation to the author.

Legal Disclaimer: The contract alert should not be understood to be legal advice. The issues presented by contract law are complex. Authors should consult a competent attorney familiar with the business of publishing as well as contract law before signing any contract.

The publisher in question is Fireside Press.

The cancellations were first reported on October 8 by Jason Sanford in his Genre Grapevine column, and discussed on October 9 in Mike Glyer's File 770. Fireside publisher Pablo Defendini issued a statement on October 8, in which he revealed that the five canceled contracts were for manuscripts that were "unpublished and unannounced", and attributed the cancellations to disruptions caused by editorial departures.

Author Meg Elison, one of the canceled authors, did not find this to be a sufficient explanation...and she was livid. 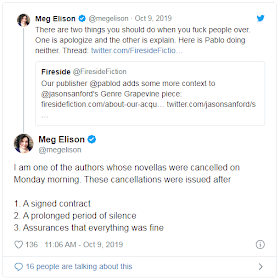 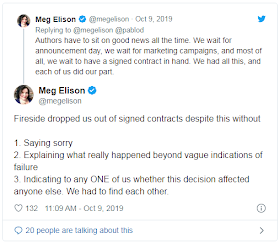 A few days later, Defendini issued an apology. "I can see now how [the cancellation emails] read as callous, uncaring, and dismissive of the authors’ feelings," he wrote. "I’m very sorry for that....My behavior was not consistent with Fireside’s values, and I deeply regret it."

Beyond the Contracts Committee's general warning about no-advance contracts (and if you're part of the small press world, you know how common these are): multiple simultaneous contract cancellations are not frequent or normal, and can signal trouble beyond whatever the publisher offers as an explanation (if it explains at all). Ditto for a publisher that suddenly starts offering to revert rights on request.

Fireside's situation also highlights the risks of signing with a publisher that's essentially a one-person operation (as Defendini admits in his apology). With the best will in the world, the publisher can be sidelined by a single bad event (personal or professional), leading to glitches, errors, and delays in scheduling, payment, and more. Writer Beware's files are stuffed with such stories.

Troubled publishers do recover, or at least hang on. Month9, which canceled dozens of contracts in 2016, is still publishing, as is Permuted Press, which axed an undisclosed number of titles in 2015 (both publishers cited overstocked lists, though in both cases there were other issues as well). In the short term, though, if a publisher is or has been actively shedding writers, it's best to hold off on submitting until it's clearer what's going on.
Share