A Pack Of Scammer Lies 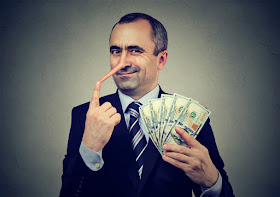 How do scammers entrap unwary writers? The other day, an especially egregious example came across my desk, in the form of this "proposal" shared with me by an author who really, really wanted to believe it was real (I've redacted the author's name and book title to protect their privacy). 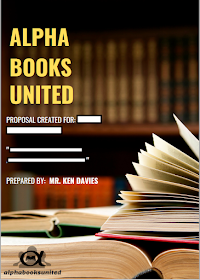 Not to beat a horse, dead or otherwise, but if you'll glance at the sidebar, you'll see that Alpha Books United is on Writer Beware's big list of Philippines-based Author Solutions copycat publishing and marketing scams. (When I got hold of this proposal, on September 26, Alpha Books' website was working fine, but when I checked it today it refused to load. "Mr. Ken Davis", however, has not stopped emailing and calling the author who contacted me.)

(UPDATE: Just a few hours later, Alpha Books' website is back online. Check out its specifics-free About Us page, on which it tells the following lie: "Once you’re earmarked, we open the possibility for you to be eligible for a non-contributory agreement with us.")

Here's the bait. Author empowerment! Amazing expertise! Commitment! Relationships! Sounds good, right? (Other than the complete lack of any verifiable specifics, of course.) Like most scammers, Alpha Books is counting on establishing a direct line to the author's deepest hopes, dreams, and ego.

Note that there's no mention of money. The initial phone calls and emails sent by "Ken Davis" didn't mention money, either. 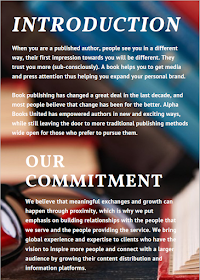 Here are the "PUBLISHING Inclusions" supposedly on offer (only "if needed", of course!). Kind of bare bones basic, right? But for an author who isn't all that savvy about what goes into design and production, it hits the high spots: cover design, print and ebook format, and the all-important "content evaluation," which Alpha Books is hoping the author will wrongly interpret as "editing".

Again: no mention of money. That will come later, after the author has responded with interest to what they may believe is an amazing offer, especially if it's accompanied by flattery about how their book has been "discovered" or "recommended" by "book scouts" or "literary agents". These scams are successful in part because they solicit so relentlessly, but also because they have an acute grasp of author psychology. They know that it's easier to hook victims if you first get the victims to hook themselves. 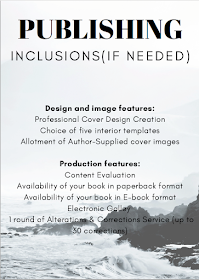 And here is the pack of lies. Well, pretty much everything the scammers offer is a lie, but these are mostly slant lies: they could be true (it's just that they aren't). Alpha Books, on the other hand, distinguishes itself by going well beyond the usual obfuscations and half-truths with a great big alternative fact: guess what, we have access to Penguin Random House! Which will pay you $40,000!

If Alpha Books' previous phone calls and emails haven't convinced the potential victim, this magic name surely will. It's an especially sneaky tactic because there really is an Alpha Books associated with PRH: it's under the umbrella of the DK imprint, and publishes, among other things, the popular Idiots Guides series.

Of course, to anyone who knows a little bit about publishing, Alpha Books' claims about PRH are laughable: 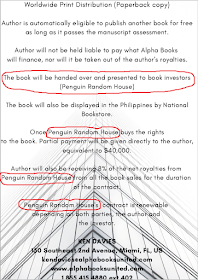 The author who received this pitch nearly fell for it. Only when "Ken Davis" told them they'd have to pay $7,000 for this wonderful opportunity (the "true" cost being $19,000, of which Alpha Books would supposedly defray the bulk) did they start to balk. At that point, this happened:

As brazen as most of these scams are, this is just about the worst I've seen.

Fortunately the author contacted me, and I was able to convince them they were being scammed. (It wasn't the first time: they'd originally published with one of the Author Solutions imprints, and had previously been solicited by scammers Bookwhip, Stonewall Press, and True Media Creatives.)

I'm guessing that at least a few of my readers will be thinking "Well, if someone is that naive/ignorant/unwary, they deserve what they get." Believe me, I get frustrated too with writers' gullibility, and in particular with how many writers fail to educate themselves about publishing and self-publishing before trying to publish. But no one, no matter what, deserves to be deceived and ripped off by a pack of con artists.

That's why I keep doing what I do. Suck it, scammers.
Share