Scroll down for updates

On Wednesday, September 11, Publishers Lunch published an article by Erin Somers about payment issues at Dreamspinner Press, which I'm reprinting here with permission.

Romance publisher Dreamspinner Press has not been paying royalties in timely fashion, authors have been reporting online, at least partially confirmed by emailed updates from the company that have been shared. Earlier this summer, authors posted on Twitter that the publisher had been inconsistent with payments for over a year, including delays in issuing both first quarter and second quarter 2019 royalties. In June, author TJ Klune posted, "Out of the last 8 quarters, this is the fourth time payments have been late, and the second in which I am owed penalties for said lateness." (Klune had said in March he would part ways with Dreamspinner after delivering three more books.) Author Suki Fleet posted, "I'm not waiting on a lot--but what I am waiting on is from foreign royalties paid to Dreamspinner this time *last* year, that I had to specifically ask for."

That month authors began announcing requests to revert their rights, a trend that continued over the course of the summer. There was some controversy within the romance community over whether authors withdrawing their work could cause the publisher to fail (or fail faster), in which case no one would get paid. Criticism extended to authors who supported the publisher as well, even though they were owed money.

Multiple agents PL spoke to said they were no longer doing business with Dreamspinner, except to negotiate their clients' rights back. They told us that acquisitions at the publisher had dwindled over the past year, confirmed by the sharp drop in PM deal reports, with Dreamspinner acquiring mostly from their existing authors, many of whom are unrepresented.

Dreamspinner provided authors a number of explanations in weekly emails, including writing that they had "not received payments from Amazon for UK or EU currencies," that they were awaiting deposits from "vendors," and that the late payments had been caused by a software glitch. In their latest update on September 4, the publisher said that they are anticipating a small business loan that will enable them to issue payments, and that they "can't offer a firm payment date to catch up what everyone is due." The email goes on, "With every set of deposits we receive, we've been sending payments, and we are continuing to respond as best we can to author requests." They added that they can't provide proof of the impending loan that authors have asked for because, "legal and banking documents are confidential and can't be posted online."

Meanwhile, authors including Indra Vaughn, Avon Gale, Jeff Adams, Will Knauss, CJane Elliott, Meredith Shayne, Tia Fielding, and many more have requested rights back. Fielding wrote on Facebook, "In the last year or so, they've repeatedly been more or less late in royalty payments." TJ Klune wrote in an email to the company that he posted on Twitter, that he is owed $27,448 in royalties and plans to involve a lawyer. A Facebook group of 75 former DSP authors has formed for people who have pulled their books or are considering it.

Writer Beware has been receiving similar complaints about late royalty and advance payments and confusing/conflicting explanations for the delays, with some authors saying they are owed four- and even five-figure amounts. According to a number of authors who contacted me, these problems have become more acute in the past few months, but they aren't new: periodic payment delays, with attendant excuses, began as much as two years ago.

Although Dreamspinner regularly sends out update emails (you can see an archive of these here), several authors told me they were having trouble getting responses from Dreamspinner CEO Elizabeth North.

Also of concern: in the midst of repeated payment delays, and despite its admissions of financial distress, Dreamspinner appears to be proceeding with sweeping expansion plans, including a shift to mass market paperback format, increasing the number of translations for the foreign market, and rolling out a new accounting and payment system (which several of the authors who contacted me told me they'd had trouble with). Multiple authors told me that they fear that author royalties, which Dreamspinner says go into an escrow account, are instead being used to finance company operations.

Authors' anger at the situation is growing. Meanwhile, Dreamspinner is still open for submissions. Writers who are considering approaching this publisher might want to hold off for the moment.

Non-Dreamspinner author X. Marduk is compiling a Dreamspinner timeline, with lots of links to tweets and blog posts.

UPDATE 12/25/19: The payment problems at Dreamspinner appear to be ongoing. A group of Dreamspinner authors contacted RWA to request help:

You can read the entire letter here.

According to one of the letterwriters, RWA responded that there is nothing they can do. Dreamspinner's issues are now part of the implosion of Romance Writers of America, with writers increasingly furious over RWA's alleged foot-dragging in addressing complaints--not just about Dreamspinner, but generally.

UPDATE 12/28/19: Another of Dreamspinner's eminently reasonable-sounding but holy-crap-if-you-read-between-the-lines updates. (Summary, if you don't want to click on the tweet: they've hired a firm that specializes in financial restructuring to "develop a plan for 2020 and a structured repayment of all past due amounts." They promise to "be in touch with authors directly about their repayment schedule".)

When you have to explain yourself by saying "We want to make clear that this isn't bankruptcy", it's not generally a good sign.

UPDATE 1/16/20: I continue to hear from Dreamspinner authors who have not been paid. Some are owed thousands of dollars for the first three quarters of 2019, and have received no payment at all; some have gotten partial payment, or are owed for fewer quarters. Bottom line: Dreamspinner owes a crapload of money to its authors.

According to the latest update from Elizabeth North, "Payments for November have started posting. They will all be submitted through Tipalti [Dreamspinner's accounting software] by Friday, January 10." What this appears to mean--at least, as of this writing and based on the authors who have contacted me--isn't actual payment (as in, money in bank account), but a status change on Tipalti from "In Process" to "Submitted For Payment." Also, the payments are for November royalties only. Anything prior to that will be folded into the restructuring plan Dreamspinner says it is pursuing.

Other stuff:
One thing that's really striking to me in this whole mess is how, if you look at just one of Dreamspinner's announcements and updates, they sound so very businesslike and reasonable. It's only if you go back and read them all in sequence--as I just did--that the facade starts to crumble, with unmet deadlines, moving goalposts, and unfulfilled commitments.

Back in June, Dreamspinner was promising that "the remainder of outstanding royalties" were about to be released...but here we are in January 2020, and they still owe tens of thousands of dollars. In July, they promised that they were "in the final steps" with the Small Business Administration loan, and "estimated funding has been moved back to mid-August"...but as of January, the loan is still pending. Over the months from June through December, they promised repeatedly to get everyone paid (especially, again and again, royalties for Quarter 2)...and then, in December, they suddenly announced the hiring of a firm to re-structure the entire debt from October backward, with no details about the process, or even an end date for it. Presumably, this firm will want a fee...from a publisher that can't afford to pay its authors.

I get that it's tough out there for small presses. Things go wrong. Vendors are tardy. Loans fall through. Personal emergencies happen. But read from beginning to end, Dreamspinner's updates--so reasonable-seeming individually--start to feel like mere excuses. Together with authors' frustrations and complaints, they paint a really troubling picture.

UPDATE 1/17/20: Re: all those November royalties that were to be released by January 10, and are currently listed in authors' Tipalti dashboards as "submitted" but not actually paid...this rather irate email from Tipalti to Dreamspinner in response to an author's inquiry about the delay suggests why nothing is landing in authors' bank accounts: Dreamspinner's payment account is not funded.

This is not good news. It's really starting to feel like there's some serious gaslighting going on here.

UPDATE 3/19/20: Dreamspinner has not provided an author update since January 7, and writers are still reporting that royalties are in arrears. Yet, amazingly, Dreamspinner is open to submissions:

Writer beware.
UPDATE 6/9/20: Since January, there has been just one author update, in March, according to which "100 percent of website sales are going toward author royalties". There's something else new as well: a statement from Romance Writers of America. 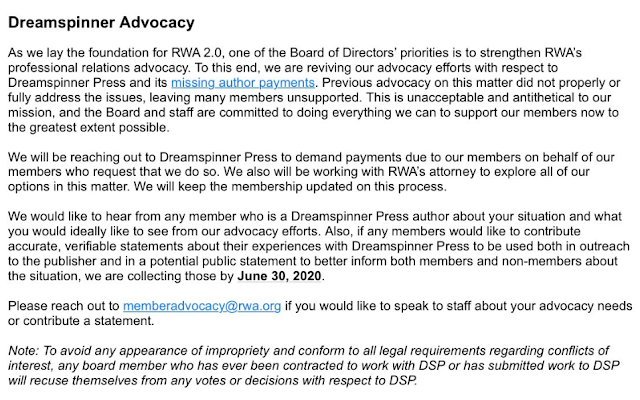 UPDATE 6/26/20: In its first update since March, Dreamspinner employs a lot of words to inform authors that a) there are still outstanding royalties, and b) the SBA loan is still "in process." Also, pandemic.

So, there's a new Dreamspinner update.

I was thinking about not posting this, because there are Certain People who are likely going to get angry, but whatever. I'm doing this as a member in good standing of the RWA, as I have been doing for more than a year. pic.twitter.com/TzA6Fyd7Cn

Since Oct. 1, 2019, Dreamspinner Press has been on probation as an RWA Qualifying Market for missing author payments, as reported in the press, by Dreamspinner itself, and by authors who have shared their royalty statements

Aaaaand no surprise: writers are still reporting that they aren't being paid:

All right, time for more #Dreamspinner talk. So (for the new folks) I'm a published novelist. My m/m romantic thriller "Zero at the Bone" (as Jane Seville...available on Amazon via KDP, go buy it!) was published by Dreamspinner Press in 2009. It was quite successful. 1/