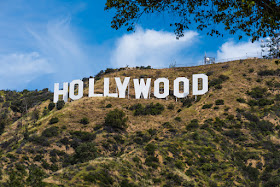 Selling film rights to Hollywood is among writers' most fevered dreams. And where there is something that writers want or need, there are always sharks waiting to take advantage.

The Hollywood book-to-screen "marketing" package was pioneered by Author Solutions, way back in the early 2000s. All the Author Solutions imprints offer it, including the imprints AS runs for publishers. Here's what the package looks like, from AS imprint Xlibris:
Although a handful of other assisted self-publishing companies have offered similar packages over the years (here's the one from Bookstand Publishing, for instance; Outskirts Press also had one for a time, though it seems to have been discontinued), Author Solutions hasn't faced a lot of competition in the high-priced Hollywood dream exploitation business--primarily, I'm guessing, because of the cost and coordination involved in providing the coverage, critiques, treatments, and screenplays to the authors who buy them.

An explosion of book-to-screen "services" has hit the internet, courtesy of the Author Solutions copycat scams that I've been writing about so much lately (there's a complete list in the sidebar). Author Reputation Press, Coffee Press, Dream Books Distribution, Media City Publishers, Paramount Books Media, Book Art Press, New Reader Media, BookVenture, Pearson Media Groups, MatchStick Literary, and more all offer some version of the Author Solutions book-to-screen package, either on their websites or in their (extremely aggressive) phone and email solicitations.

The value of any book-to-screen package is highly debatable, regardless of who provides it. Vendors of such "services" play on authors' dreams of making it big, while failing to provide any kind of realistic information about the extreme unlikelihood of success. Most books never sell or option film rights (they're among the subsidiary rights least likely to be exploited, even for successful authors with top-flight agents), and it's far harder to sell a screenplay than it is a book manuscript. For most authors, the most probable result of buying a book-to-screen package is a smaller bank account.

And that's assuming that the vendor actually provides the advertised services, and doesn't just take the money and run. Author Solutions, at least, does seem to produce the coverage, etc., it sells, in a reasonably literate manner (you'll see some examples if you read on)--though of course, like paid reviews, the critiques and coverage are likely to be customer-friendly--that is, unrealistically positive.

The copycats, on the other hand...they don't exactly have the greatest track records for quality, reliability, or service. Or honesty.

An example: Universal Book Solutions, which styles itself "a Book-to-Screen Marketing Professional, with years of experience in working for motion picture projects for producers, agents, directors, and major studios in Hollywood." As usual with the Author Solutions copycat scams, there's no information that would allow you to verify any of these claims--no list of owners or staff, no company history, no examples of successful projects. That's no accident, of course.

A sensible person might also wonder about the quality of written materials produced by a "Book-to-Screen Marketing Professional" that puts out website text like this (English-language lapses are one of the markers for the copycat scams): 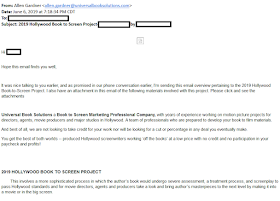 The email goes on to detail the services on offer--news release, coverage, treatment, and screenplay--in language that has been lifted directly from the Xlibris (and other Author Solutions imprints) book-to-screen package. As further inducement, a bunch of glowing--and conveniently unverifiable--quotes are appended at the end. Turns out that these too have been lifted, though from a different (and, in its way, equally questionable) source. 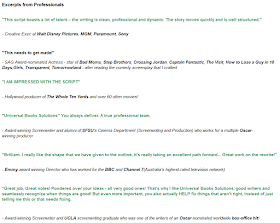 Last but not least, UBS includes several attachments--supposedly, examples of its work:

"Sample coverage" is this. Looks surprisingly literate and detailed, doesn't it? But wait. Here it is again...on the iUniverse website (the book was published by another Author Solutions imprint). Ditto for UBS's "sample treatment:" here's what UBS sent. Here it is at iUniverse (which also published the book in question).

(As for The Little Prince screenplay, I can't find any evidence of it online, but given all the other borrowing, it's sure to have been snitched from somewhere.)

Universal Book Solutions claims a Florida address (per a Google search, it's a private residence in what looks like a condo community), but has no business registration in that state. Its web domain was registered just last February. As for Allen Gardner, Project Manager, guess where he's located.

UBS is an especially egregious example of this increasingly common scam. But as noted above, there are many others, and they are aggressively soliciting authors, especially those who have published with Author Solutions imprints, small presses, and pay-to-play companies like Christian Faith Publishing and Page Publishing. Be on your guard, and if you hear from a company that wants to take you to Hollywood--for a price--remember that if it sounds too good to be true, it probably is.

For a much more realistic discussion of the book-to-screen process, see Jane Friedman's excellent article, How a Book Becomes a Movie. Scroll down to the final comments to see one from a writer who was solicited by Universal Book Solutions.
Share