Termination Fees in Publishing Contracts: Why They're Not Just Bad for Authors 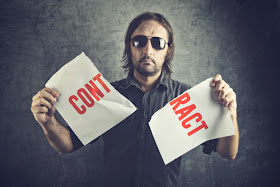 In the course of my work with Writer Beware, I see a lot of publishing contracts (for the most part, these are from small presses). One of the red flags I'm encountering more often these days is early termination fees: a penalty that must paid by the author if s/he wants to get out of a contract early.

A few examples of early termination clauses, taken from contracts in my possession:


The Author may terminate this agreement before the end of the term by means of a contract buyout....The Author will pay to the Publisher the sum of $500.00 (five hundred dollars) to exercise this contract buyout option. This fee must be paid to the Publisher by the Author at notification of intent to exercise the buyout option. The Author will be responsible for full payment of damages and customary legal fees as a result of legal action stemming from failure to pay this buyout clause.

Once a work has gone into editing and forward and the Author wishes to terminate this contract prematurely, a penalty shall be charged to the Author to cover costs of staff and artists for work already performed. This fee shall be at a minimum of $50.00 to a maximum of $1000.00 to be determined by the time spent on preparing the work for publication and money recovered from sales of the work.

Why are termination fees a red flag? Obviously they are onerous for authors, who might have good reason to want to end a contract early, and can't do so without opening up their wallets.

Of more concern is the fact that publishers may employ them abusively, holding them over the heads of unhappy writers, attempting to use them as an extra income source by offering to jettison dissatisfied authors at the slightest provocation (one publisher I know of even provides an annual "get out of jail free" period where writers can request an invoice), or terminating the contracts of writers who've pissed them off and demanding the fee even though termination wasn't the writer's decision.

I've gotten complaints about all of these. For instance, last year I heard from an author who was quoted an early release fee in the low four figures, described as a reimbursement for production costs--despite the fact that the book had been in circulation for some time and the publisher had likely made back its investment.

EPIC, an association for epublished authors, identifies termination or kill fees as a red flag contract clause--one that authors should absolutely avoid:


Most of these clauses refer to pulling a book during the middle of the contract, but some even require a kill fee paid to the publisher by the author for failing to renew the contract at its natural end. This last requirement isn't acceptable.

But termination fees aren't just bad for authors. They're bad for publishers, too.

Sure, from an honest small publisher's perspective--a publisher that isn't planning on browbeating its authors with termination fees, or using the fees to try and make an extra buck--a termination fee may seem to make good business sense. "We don't want to hold onto an unhappy author," the publisher might reason. "But we invest a lot of work in editing, designing, marketing, etc. So if we can't maximize our investment by selling the author's book for the full contract term, it's only fair that we should get some reimbursement if she decides to leave early."

Problem is, if the unhappy author can't afford the fee, the publisher is stuck with her anyway--along with, possibly, the extra resentment produced by the author's knowledge that she could have escaped if only she'd had the cash. (I've gotten many, many complaints from writers in exactly this situation.) Alternatively, if the author can afford the fee, he may see it as an easy exit, and jump ship without giving the publisher the chance to address whatever problems the author has identified--thus losing the publisher a book it might have retained if it had been able to work things out.

For publishers willing to let their unhappy authors go, it's far easier--and far more author-friendly--simply to allow authors to terminate the contract at will, without the potential complications and bad feelings of a termination fee. To protect its investment, the publisher can require a waiting period, such as one or two years, before the termination option can be invoked.

Even better, for publishers that are willing to try and resolve any problems that may arise: don't include an early termination provision at all. Impose a reasonable contract term, and stick to it. This allows the publisher the best chance of recovering its investment in a book (and hopefully making a profit), while ensuring that the author can eventually regain their rights without opening up their wallet. (Though authors take note: if the contract is life-of-copyright and not limited-term, you should always be able to revert your rights once sales fall below a stated minimum).
Share